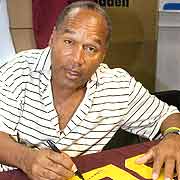 I saw this in the National Enquirer:

O.J. Simpson confesses to the bloody slaughter of his ex-wife Nicole Simpson and her pal Ron Goldman – and reveals he had an accomplice at the scene--in a bombshell new book!

Eleven years after Simpson was acquitted of the Murder of the Century, The ENQUIRER has learned exclusively that O.J. is being paid $3.5 million to describe the brutal knife attack blow-by-blow.

"Only that kind of money could have tempted O.J. to finally tell the truth," a West Coast source familiar with the top-secret book project told The ENQUIRER.

In the book, "he describes how he grabbed a knife from a man who accompanied him to Nicole’s home -- and moments later found himself covered in blood and looking down on the bodies of Nicole and Ron," said the source.

With its publication only weeks away, the tell-all blockbuster has remained the most explosive secret in publishing -- until now.

In its early chapters, O.J. paints a vivid picture of his life with Nicole and details their bitter divorce amid her affairs.

Finally, the disgraced Hall of Famer gets to June 12, 1994 – the night of the infamous double murder.

"O.J. prefaces these key pages by almost half-heartedly claiming this part of the book is hypothetical," said the source. "But I don’t think anyone is going to be convinced of that."

Because of "double jeopardy" laws, legal experts say O.J.'s confession will not likely lead to any legal trouble for him.

The book's working title is "If I Did It." But Simpson's account of the slayings is so chillingly realistic that it leaves no doubt it is a confession of what really happened.

...and I could not believe it. So I searched for his name and found this in the SF Chronicle..

O.J. Simpson Denies Book Confession
Former sports star and actor O.J. Simpson has slammed reports he is to be paid around $3.5 million for "admitting" to the killing of Nicole Brown and Ronald Goldman in a sensational new book.

A U.S. publication reported the star plans to publish his autobiography in which he will describe how he would have killed his ex-wife and Goldman, in an allegedly fictional manner. They were stabbed to death in 1994 and Simpson stood trial for the murders. He was found not guilty.

But Simpson's lawyer Yale Galanter denies the rumor. He tells the New York Daily News, "(Simpson) is not writing a book. We haven't been paid 35 cents, much less $3.5 million.

"If anyone comes out with such a book, I'll go on every talk show and call it crap."

Whatever is going on, it's clear that someone out there can't just leave O.J. alone. That's sad. He was acquitted in the criminal trial and the civil trial left out so much evidence it was a joke.
- October 24, 2006