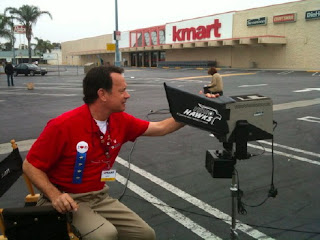 Three days ago, this space featured a photo of Toy Story 3 actor, the Legendary Tom Hanks, looking at playback from his upcoming movie Larry Crowne, co-starring Julia Roberts. In the process of researching for that blog post, at least three sites have it, two for free and one for pay.

Of the free websites, one is a Julia Roberts Fan site called AboutJulia.com, and the other is the beloved Awards Daily.com.

The third site is called "The Tracking Board" where you can get it for $59.

With all the Internet exposure, I figured Tom Hanks deliberately leaked the November 2009 draft of the script to create buzz before Toy Story 3. So, why not put it on Scribd to generate even more buss, right? After all, what's the passive aggreession for?

Well, someone managed to convince the dude at Scribd that having the script on Scribd was a copywrite violation. But if Tom Hanks' people are really that concerned about having it out there, why allow all of the links?

A team of people could give Playtone Productions a lot of headaches by just posting and reposting the script. That leads to one question: who leaked it?

Someone out the script out there for view. If I were running Playtone Productions, I'd have done it on purpose, then altered the movie here and there just to add some twists not in the script.

Whatever the case, Larry Crowne's being tossed around and why not?  It's a good script.