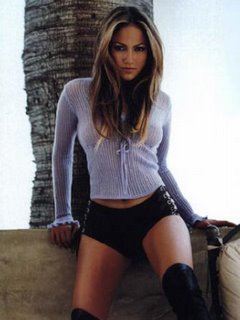 Personally, I'm not hot about the idea. I think a really buffed actress should play her

Herbie: Fully Loaded star Lindsay Lohan is desperate to play Wonder Woman in the forthcoming movie version of the comic book superhero. The 19-year-old Freaky Friday actress admits she'd like to showcase her talents outside of kid and teen films, but feels the role would be too fun to turn down. She says, "Wonder Woman would be cool. I'm trying to find roles right now that are different to anything I've done to show my abilities, to show that I have some sort of stretch in me. Because most of the things that I've done so far are aimed at younger girls and are light-hearted."
- March 22, 2006 No comments:

Not too long ago, I got after Josh Whedon, the writer / director for the new "Wonder Woman" movie, for seemingly dragging his feet on the project. Now, he tells Sci-Fi Wire that it should be finshed by this week.

This is what he said:

Whedon likened the character to another one of his creations, Buffy the Vampire Slayer, adding: "It's about girls maturing, a rite of passage, that kind of thing."

Whedon said it's too early to speculate on casting for the project. He will be turning the script in to Warner Brothers and hopes to begin production later this year.
- March 22, 2006 No comments: