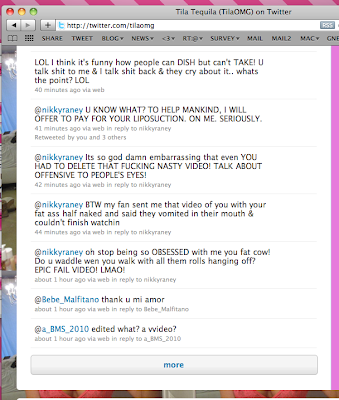 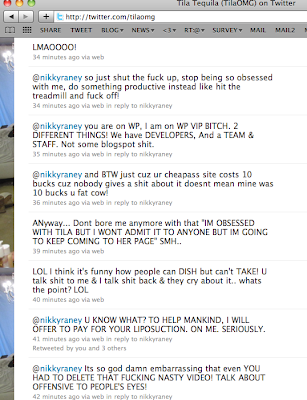 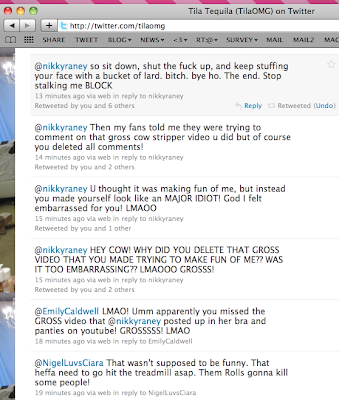 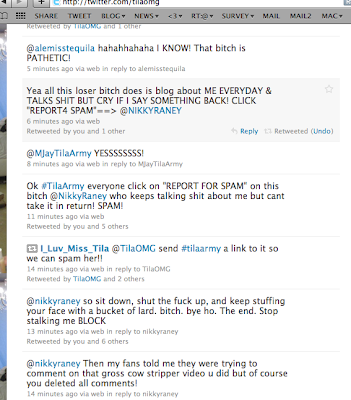 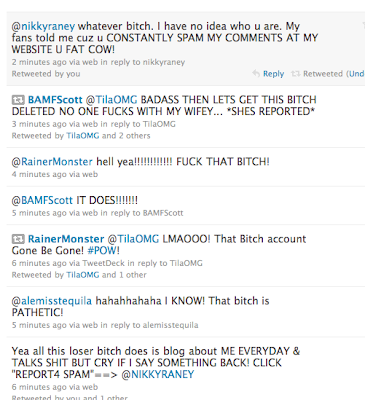 I would like to allow the tweets to speak for themselves.
I have made it clear I do not hate her, and she has decided to personally attack me.
Which, would count as defamation of character because she is maliciously attacking me.
And continues to call me fat.
Anyone who has read any of my posts about her will know that all my posts are backed up with facts, screenshots, and other posts. I have not posted any lies or any attacks toward Tila Tequila. It's unfortunate that she has chosen to attack me and call me fat, but her attention proves that I have done something of an impact. I am still not a hater, I don't hate her and will not attack her. I will continue to expose her, and hopefully I will get her to stop lying. Seriously.
If my twitter gets deleted I will be disappointed, but at least I will know that my point has gotten across. Now, as for me being fat 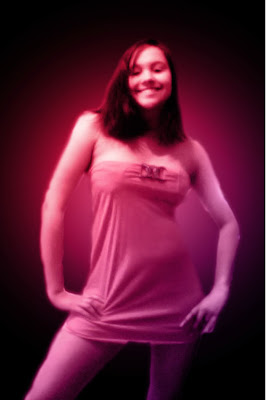 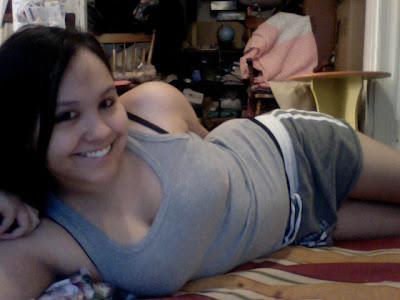 I must admit I do feel honored that Tila Tequila, the mogul, took time out of her busy celebrity life to make over 20 tweets about me. Let's see if she makes a blog post about me. This will be interesting. *yawns* Looks like my work here is done. There's nothing left to say about her. For a 28 year old to attack and defame and maliciously post those things to a 20 year old that has never said she hated and has never attacked her, quite immature and shows what kind of person she really is.
- June 20, 2010 No comments:

On Twitter, Skyline High Oakland (74) Graduate Tom Hanks posted a link to a recent June 18th photo of the actor reviewing playback on his movie, the comedy Larry Crowne. It's the first movie Hanks has written and directed for in 14 years, the last one being That Thing You Do in 1996.

Larry Crowne, played by Tom Hanks and starting Julia Roberts is described in this way on IMDB.com:


After losing his job, a middle-aged man reinvents himself by going back to college.

While that sentence may read as simple, it invites some interesting assumptions of how Larry Crowne "reinvents himself."

Whatever the case, the cast is an interesting combination of new and established stars: Julia Roberts, Taraji P. Henson, Nia Vardalos (who's also co-writer with Hanks), Pam Grier, Maria Canals-Barrera, George Takei (from Star Trek), and Cedric the Entertainer are just some of the names reported to be in the movie.

Slated for 2011 release, Tom Hanks' assistant Bo Stevenson posted a Facebook note that "This film is different than most of the ones Tom has been a part of in the past - it's independent, it's low budget (well, ok low budget for Tom but still...).

The full story of Larry Crowne is about a popular but middle-aged team leader and 22-time "Employee of The Month" at a store called "Unimart" who loses his job due to corporate restructuring. Crowne's the highest paid employee, so the corporate execs feel they have to "make up a reason" to get rid of him.

Larry does not have a college degree, which the corporate execs say he must have to advance up in the firm's management ranks, so they say they have to release him. That, even though Larry served in the Navy, and all of this just as he's named Employee of The Month for the 22nd time.

What follows is a story of a normal every-man being turned away by his bank and picky, potential employers in the middle of this credit-crunch economy. It's a well-written view of what Americans of every stripe have experienced.

For the rest, you'll have to read the script. I have and while it has it's funny moments, it's also one that has a perfect read on American Culture. It' feels like every story you've seen and in a way is a Norman Rockwell painting turned sideways...by Tom Hanks.

The Larry Crowne Script is online

A copy of the 139-page, November-2009-Draft of the Larry Crowne script was placed online and turned up in two places: one a pay-for-access script page, the other a Julia Roberts fan website. Turning it into a document for placement on Scribd was easy. Here it is:

Tom Hanks has another hit on his hands with Larry Crowne, and it's not due for release until 2011. I don't think the script, at 139 pages, is exactly what we will see in 2011, because, at one minute of screen time per page, it's over 2 hours long. Getting it down to 120 pages, and thus 2 hours, is something I'm sure Hanks has done.