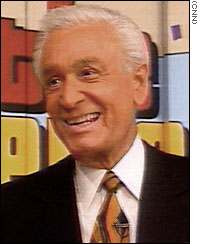 I now know I've been around a bit when this happens. I have grown up with Bob Barker, patted myself on the back for rightly guessing a price, dreaming that I was the winner of the showcase, and drolling over the Price Is Right girls. Well, the last part of that remains, but Barker, the real symbol of the show and an American icon, has retired. Here's an article by E! Online and selected YouTube Clips to celebrate Bob Barker.

The price isn't going to be quite as right come next June.

Bob Barker announced Tuesday he will retire in 2007 after 50 years in television, 35 of which he spent as the host of The Price Is Right.

"I will be 83 years old on Dec. 12, and I've decided to retire while I'm still young," the famed daytime personality told the Associated Press. "I've gone on and on to this ancient age because I've enjoyed it. I've thoroughly enjoyed it, and I'm going to miss it."

While Barker has considered hanging it up for the past 10 years, he said he's been having too much fun to walk away for good, but he figured reaching his golden anniversary was an "appropriate" time.

"I'm just reaching the age where the constant effort to be there and do the show physically is a lot for me," he said, sounding a bit like another TV icon who announced his intention to slow down after half a century on the air, 60 Minutes' Mike Wallace.
Barker had a mild stroke in May 2002 and had prostate surgery six weeks later—none of which caused him to miss a show, mind you.

Since The Price Is Right premiered Sept. 4, 1972, with Barker enticing people for the first time to "come on down," he has only missed three episodes (back in 1974). The longest running game show on the air is currently on in two half-hour installments every weekday, with the later one averaging 5.5 million viewers a day, per Nielsen Media Research.

"We knew this day would come, but that doesn't make it any easier," CBS Corp. president Leslie Moonves said in a statement. "Bob Barker is a daytime legend, an entertainment icon and one of the most beloved television personalities of our time."

The former Miss Universe and Miss USA Pageant host got his start in radio before being discovered by eventual This Is Your Life host Ralph Edwards, who said he liked the sound of Barker's voice. Barker went on to host the TV game show Truth or Consequences from 1956 until 1975, overlapping with Price for a few years.

A CBS spokesperson told Reuters that Price will go on after Barker's departure, but "it's premature to discuss any transition plans right now. Our focus now will be giving Bob a proper sendoff." A CBS prime-time special celebrating the man is also in the works, he said.

Barker's advice for whomever signs on to replace him is this: Memorize everything.

"The games have to be just like riding a bicycle," he said, referring to the show's numerous pricing games (80 at last count) in which contestants make bids to win larger prizes, like cars and trips.

"Then he will be relaxed enough to have fun with the audience—to get the laughs with his contestants and make the show more than just straight games—to make it a lot of fun."

While the silver-haired emcee has always had a smile for his studio audience and millions of at-home viewers, it wasn't too long ago that Barker was accused of enjoying his hosting duties a little too much.
- November 02, 2006 No comments: