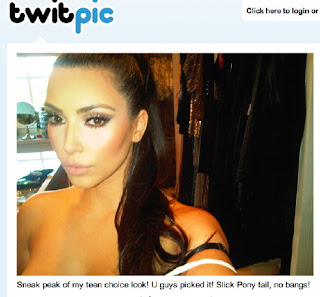 LL Cool J's in his 40s as are people like P Diddy, and of course the incomparable Betty White, who's 88 years old.

Age is just a number, but the number of hot women was so high it made this blogger's ears pop.

Where else can you see Kim Kardashian tell Megan Fox that Fox is more beautiful than she is! And who let Sarah Palin's almost son-in-law Levi Johnston into the Teen Choice Awards?

How random is that?

The Teen Choice Awards is a celebration that seems to have made the Twilight: New Moon cast stars before they knew what hit them. Taylor Lautner, who's now called "Taylor Hotner" on Twitter, picked up his third straight award this year.

The one thing missing was a Miley Cyrus song or dance number. We've got so much publicist from her machine, it seems the Teen Choice Awards is missing something without Miley Cyrus.

Oh, and her pole dance number!

Lastly, a big congrats to YouTube Partner Michael Buckley of The What The Buck Show for co-hosting the live stream of the Teen Choice Awards Red Carpet Show!
- August 10, 2010 No comments: