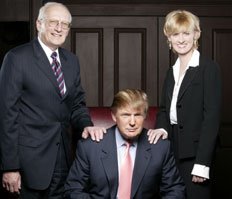 I saw this in a recent article on Trump's idea to have viewers pick the Apprentice. The reason for the low number is simple: Jack Baeur. "24" is simply too hot to be beat by The Apprentice on Mondays.

NBC made a terrible mistake. Now, they're taking a beating in the ratings on Thursdays and Mondays, with no relief in site.

...Unless they move The Apprentice back to Thursday's ASAP.


Donald Trump is taking a page from Simon Cowell's playbook.

The real estate mogul/reality TV star has announced a change in plans over how he'll choose his next Apprentice, allowing viewers to phone in votes on who they believe should be selected as the next mini-Trump.

"I'm very anxious to see who the fans choose for their favorite finalist--their decision could have a big effect on my ultimate decision," the Donald said in a statement.

Unlike American Idol or other audience-dictated reality shows, viewers who cast their vote for one of The Apprentice's burgeoning businesspeople may not get the payoff they're expecting. The contestant who racks up the most votes will not automatically win the coveted apprenticeship--Trump will simply be made aware of the tally before making his final decision.

"Over the past four seasons of The Apprentice, Donald Trump has used the final episode to hire candidates with advice only from George and Carolyn," Mark Burnett, the show's creator and exec producer said. "This year we thought it would be interesting to discover what America has to say about the candidates, incorporating our fans and viewers as virtual judges.

"While Trump will still be the final arbiter of who he hires, America's feedback is certain to have an impact on his decision."

And, NBC hopes, his ratings.

Despite Trump's routine boasting of his show's ratings prowess, The Apprentice has dipped to an all-time low viewership, averaging just 9.9 million viewers since the fifth cycle kicked off last month. Last fall, The Apprentice 4 drew in a slightly higher 10.7 million viewers, down about 4 million from the previous installment. (With Martha Stewart's incarnation is long gone as a scapegoat, we're still waiting to see what excuse Trump will offer now to explain away his dismal Nielsen numbers.)

Viewers will be able to cast their vote for one of the final two candidates following the penultimate episode of the season via phone or by going online. As in years past, Trump will announce the winner in the live finale, during which he will also be presented with the results of the viewer vote.