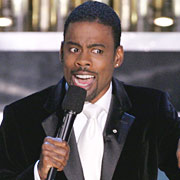 LOS ANGELES, California (AP) -- Chris Rock won't be back cracking wise as the host of next year's Oscars telecast.

"He is not hosting the Academy Awards," the comedian's publicist, Matt Labov, said Friday in a brief statement e-mailed to The Associated Press. He did not elaborate.

Labov told The New York Times that Rock didn't want to do the show "in perpetuity" but would "like to do it again down the road."

The 2005 telecast was Rock's first as host. He drew younger viewers, but his barbs skewering stars like Jude Law, Tobey Maguire and others alienated some members of the Academy of Motion Picture Arts and Sciences.

In one bit, Rock suggested filmmakers should wait for better talent instead of rushing bad movies into theaters.

He also poked fun at himself.

"You want Denzel (Washington) and all you can get is me? Wait," he joked.

Rock's comments prompted Sean Penn, when he took the stage later, to defend Law as "one of our finest actors."

Rock is currently producing and narrating "Everybody Hates Chris," a sitcom on UPN based on his life.

A spokesman for the Academy declined to comment about the hosting duties. Longtime Academy Awards producer Gil Cates is expected to announce his selection in the next few weeks.

The 78th annual Academy Awards will air March 5 on ABC from Hollywood.

Some of Rock's quotes:

"It's a great night tonight. We have four black nominees. tonight. It's kinda like Def Oscar Jam tonight."

"Black movies don't have real names, they have names like Barbershop. That's not a name, that's just a location."

"Our next presenter is the first woman to ever breast-feed an Apple - Gwyneth Paltrow."

"The only acting you ever see at the Oscars is when people act like they're not mad they lost. Nicole Kidman was smiling so wide (the year Halle Berry beat her to best actress), she should have won an Emmy at the Oscars for her great performance. I was like, 'If you'd done that in the movie, you'd have won an Oscar, girl!'"