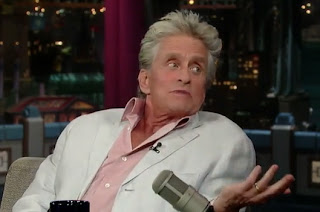 On Tuesday night, legendary Actor Michael Douglas was a guest on The Late Show with David Letterman.

It was already publicly known that he had throat cancer, but the news that it was at state IV was a shock to Letterman and the public.

This news and the outpouring of love and support for a celebrity who's contributions to the public good have been well noted, contrasts dramatically with last Friday's arrest of Socialite Paris Hilton.

Douglas told Letterman that doctors found a "walnut-sized tumor" at the base of his tongue. According to WebMD.com, that means he likely has oropharyngeal cancer. Douglas said it was caused by smoking and drinking.

Just how much Douglas smoke and drank, and what kind of alcohol he was drinking on a regular basis is not known as of this writing. But Douglas vows he will beat the cancer. The son of he legendary Actor Kirk Douglas said he has an 80 percent chance of survival. 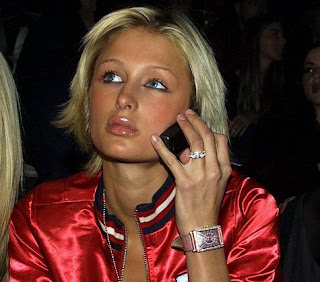 That Paris Hilton's in trouble with the law again - having been arrested for felony possession of cocaine in Las Vegas last Saturday morning - is sad news. Hilton has been arrested now three times this year alone, but in different countries: France, South Africa, and the United States.

This is a sad current affair considering her 23-day stay in jail in 2007, and the really embarrassing visit to David Letterman which followed that year. On top of the cocaine bust, now Las Vegas police are reporting they found a "joint" in the car Paris Hilton was in.

The trouble is, while the car's being reported as "Paris Hilton's car," there's no evidence to indicate that's the case. It's more likely that the car belongs to her boyfriend Cy Waits. Thus, to even try to pin what the Daily Mail reports as a "wet" and "unable to be tested."

Moreover, the person police described as "the driver" - Cy Waits - said he just finished smoking. So, pinning that on Paris Hilton is at best piling on.

Hilton herself has responded to that rumor, and others like being banned from the "two Wynn resorts on the Las Vegas Strip" on Twitter. Paris tweeted:

These rumors going around are so ridiculous, untrue and cruel. I'm not going to even pay attention to them, because I know the truth.

Here's hoping the best for Paris Hilton: that she beats the charge and is able to get on with her life.   Hopefully Hilton uses Michael Douglas as a role model for the reformation of her image.
- September 01, 2010 No comments:

Yesterday, ESPN's Around The Horn TV Show took up the "awkward" subject of the problems of one of its own, ESPN Personality Jay Mariotti.

As sports fans know, Jay Mariotti was arrested on suspicion of domestic assault against a woman said to be his girlfriend.

Jay Mariotti was known for flaming athletes accused of domestic assault, so its weird still that he's accused of doing the same thing.

And while Jay's being raked over the coals for all of that in the media, and he should be, it just seems totally classless for his own show to talk about it. Here's the video:

Maybe they don't have respect for Jay?

The logical next step is for someone else at ESPN's Around The Horn to get into the same trouble so they and we can talk about that person.