Hilary Swank - What Will She Wear This Time? 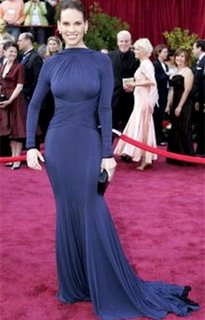 As the 78th Annual Academy Awards approach, the question I have is what will Hilary Swank wear? All I can say is last year, she was totally hot in this blue body fitting dress. I'll bet she got so many date offers it screwed up her marriage to Chad Lowe. Note to Chad: you're still friends; be the dog! Go after that bone!
- March 04, 2006 No comments: 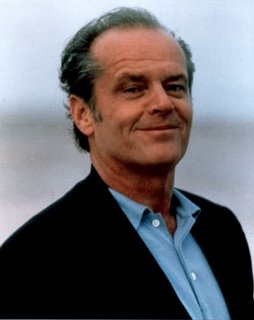 My question: will he wear sunglasses?

Academy Awards for outstanding film achievements of 2005 will be presented on Sunday, March 5, 2006, at the Kodak Theatre at the Hollywood & Highland Center®, and televised live by the ABC Television Network beginning at 5 p.m. PST. A one-hour red carpet arrivals show will precede the telecast at 4 p.m.

Wow! This is a sure sign of the changing tastes of the American public. Madea's Family Reunion, a movie about, well here's the plot line: "While planning her family reunion, a pistol-packing grandma (Perry) must contend with the other dramas on her plate, including the runaway who has been placed under her care, and her love-troubled nieces." --but really features a black man -- Tyler Perry -- in drag, is a hit as he explores black issues and family matters in a humorous way. But in a (thankfully) increasingly interracially mixed America, Perry plays to a wide audience.

With the hot "American Idol" again accounting for more than 75% of its sked, Fox cruised to victory on Wednesday in key young-adult demos, while the night's top scripted dramas delivered low-range scores.

According to preliminary nationals from Nielsen, "American Idol" averaged roughly a 12.1 rating/31 share in adults 18-49 and 29.4 million viewers overall from 8 to 9:31, dominating in each half-hour. That big score provided nice sampling for a special preview episode of slacker comedy "Free Ride" (roughly 6.1/14 in 18-49, 13.5 million viewers overall), which will regularly air on Sundays.

The annual Night Before party, held on Oscar eve at the Beverly Hills Hotel, continues its ascent as the hottest pre-Academy Awards ticket. This year's event has raised more than $6 million, up from $4 million last year.
Proceeds from the party benefit the Motion Picture & Television Fund. The Night Before accounts for more than a third of the $15 million the MPTF has raised over the last year.

"The numbers are staggering, given the fact that (the Night Before) didn't exist four years ago," said MPTF chief exec Ken Scherer.

Because of fire marshal-enforced safety requirements, guest list is limited to about 800. Among those who will be attending are Tom Hanks and Rita Wilson, Tom Cruise and Katie Holmes, George Clooney, Jamie Foxx, Hilary Swank and Night Before host Jeffrey Katzenberg.

Producers, directors, studio executives and lawyers also will be part of the crowd. The only non-invitees are press agents and members of the press -- an attempt to keep things more personal and low-key.

"What we set out to do four years ago was provide an environment where people could talk and have conversations," Scherer said. "We wanted to make it a real community effort."

The Night Before was started by Katzenberg and Variety in 2002 as a charitable solution to what was always a fairly dull evening in Hollywood -- the night before the Oscars, when industryites are typically recovering from Friday night events, such as Ed Limato's pre-Oscar party, and preparing for post-Oscar fetes, such as the Vanity Fair party and the Governors Ball, held on Sunday.

Another tradition is the Night Before the Night Before, on Friday, when there'll be a dinner at Spago for sponsors. Border Grill chef-owners Mary Sue Milliken and Susan Feniger will be on hand to teach guests how to make tamales; Mariah Carey will perform after dinner.

The number of Night Before corporate sponsors has grown by two and includes Variety, McDonald's, L'Oreal, Lexus, Hewlett-Packard, Target and AOL.

Scherer said the surge in raised funds resulted from the increase in sponsors, which each contribute $350,000, and from a greater number of contributors who made a five-year commitment of $10,000 a year to the MPTF (in exchange for getting their names placed on retirement cottages on the fund's Woodland Hills campus).

"He's the man," Scherer said of the DreamWorks Animation head. "Jeffrey and (wife) Marilyn both step up and give the same amount that sponsors give. More importantly, his passion for this charity is so strong -- he just spends hours calling people and making sure people support the organization, which is so critical to our success."

Besides charity, of course, there's swag, and the Night Before ranked high on the free goodies list last year, with guests taking away expensive sneakers and computers. This year Lexus is giving away a car, Hewlett-Packard has donated 58-inch plasma TVs and color printers and AOL is giving away a Fender guitar.

The nonprofit MPTF, headquartered in Woodland Hills, was founded in 1921 to offer charitable relief for those in the film industry who had fallen on hard times. Today, the fund provides the industry with a full-scale residential retirement community and child-care center, as well as health care, human services and financial assistance.
- March 04, 2006 No comments: