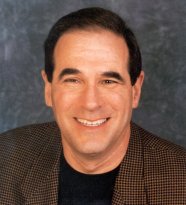 Yep. He was awarded this at the R&R 2006 News/Talk Industry Achievement Awards on March 4, in Washington D.C.

Ya know, since I've got the entire press release, and I'm not feeling well, here it is:

Ronn Owens' exceptional interviewing skills have made him one of the best in the business. Ronn recently celebrated 30 years at KGO Radio. Owens' unique style, contemporary approach and wide-ranging knowledge on local, national and international issues has additionally won him the prestigious Marconi Award for Major Market Personality of the Year by the 2003 National Association of Broadcasters, recognizing the most outstanding radio personality in the country. The Ronn Owens Program can be heard 9am-Noon, weekdays on KGO AM 810.

Jack Swanson joined KGO Radio in 1979 as News Director. He later became Program Director for eight years maintaining KGO's top-rated status. Jack's second stint at KGO Radio as Program Director began in 1994 and his reign continues today preserving KGO's 107+ consecutive #1 Arbitron surveys. Jack has enjoyed a tremendous run of success and recognition having been voted the #1 Program Director several times by industry organizations and has been the recipient of this R&R award in 2001, 2002 and 2006.


As Mickey Luckoff, President and General Manger, accepted the Station of the Year award, he stated, "It is the personnel past and present that makes KGO great. That is why we have won this award 3 times over the past 6 years."
- March 13, 2006 No comments: