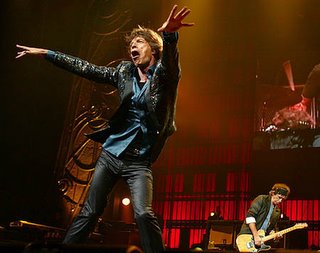 LOS ANGELES -- Powerhouse tours by the Rolling Stones, U2 and Paul McCartney helped drive concert ticket revenues in North America to a record $3.1 billion in 2005, even as the number of tickets sold declined for the third year in row.

"You have to figure that's not a healthy sign for the industry overall," said Gary Bongiovanni, Pollstar's editor-in-chief.

Despite a slow first-half of the year and the decline in tickets sold, concert tours in 2005 amounted to a 10.7 percent increase in gross receipts over last year's total of $2.8 billion.

The record revenue was due largely to the rare confluence of superstar artists touring.

"You don't normally see three huge acts like that out touring in the same year," Bongiovanni said. "McCartney and The Stones alone really helped drive up ticket prices."

The average ticket price has gone up nearly $7 since 2003.

Still, concertgoers proved this year that they remained willing to pay more to see their favorite acts, and the roster of legends that filled touring arenas had little trouble packing them in.

Until this year, the biggest tour of all time had been The Rolling Stones' 1994 outing, which drew $121.2 million in gross receipts, Bongiovanni said.

"Both U2 and The Stones went way beyond that this year," he said.

The Rolling Stones' "A Bigger Bang" tour led all other concert tours in 2005 with $162 million in gross receipts, according to the magazine.

The average Stones ticket was $133.98. The tour sold around 1.2 million tickets.